The Story of the NFTC

The NFTC was born out of an idea that the success of U.S. businesses is intricately tied to access to global markets and international consumers. In 1914, the nation’s first Secretary of Commerce, William Cox Redfield, realized that the looming specter of war in Europe, coupled with the imminent opening of the Panama Canal, represented an unprecedented opportunity for U.S. businesses.

With the blessing of President Woodrow Wilson, the United States’ first Secretary of Commerce Secretary William C. Redfield organized the first National Foreign Trade Convention on May 27, 1914. During that first meeting, business and political leaders from across the country and across the economy gathered at the Raleigh Hotel in Washington DC to discuss the importance of international trade for the growth of their businesses, cities, and the American economy; the role of commercial diplomacy for advancing democratic values worldwide; and the need for the federal government to pursue policies for opening markets and ensuring fair, rules-based trade across the globe.

On the last day of the conference, by unanimous resolution, the National Foreign Trade Convention created a committee of industry and trade experts to convene future annual conventions, and “to coordinate the foreign trade activities of the nation” in conjunction with the government and other business organizations. This committee of experts was dubbed the National Foreign Trade Council. 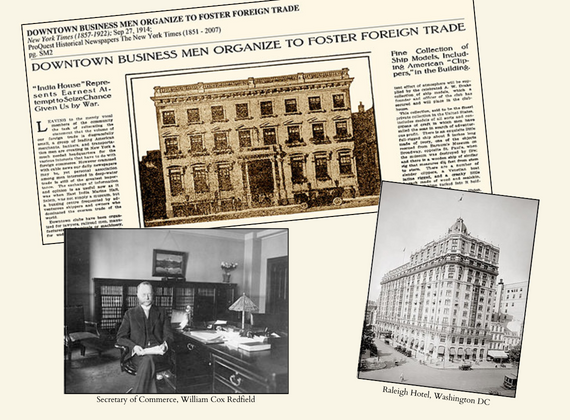 The NFTC has been honored many times in its more than 100 year history, most notably as one of the inaugural winners of the prestigious President’s “E” Award for Exporting Service Excellence in 1962, the nation’s highest export honor.

In 2014, our Centennial year, the NFTC was honored by NASBITE International with its Advancing International Trade Award; the World Trade Week NYC with its Global Trade Award. And on May 28, 2014, our centennial birthday, the NFTC was presented the President’s “E Star” Award for our continued excellence in opening markets and supporting US exporters.

Past NFTC Presidents and Board Chairs

It’s a remarkable fact that since 1932 when the office was created, the NFTC has had just 9 presidents. (Prior to that time, Chairman James A. Farrell also served as de facto NFTC President.)

The Chairman of the Board of Directors convenes and chairs board meetings, setting goals and overall direction of the organization. The Chairman must be from an NFTC member company.

The NFTC also maintains its own awards program, a tradition since 1938. The family of Captain Robert Dollar, founder of the Dollar Steamship Lines and a charter member of the NFTC Board of Directors, created an annual award in his name to recognize business and policy leaders for their accomplishments in the advancement of international trade and investment. The first winner of the Captain Robert Dollar Award was Secretary of State Cordell Hull.

The Captain Dollar award was last presented in 1985, to David Packard, co-founder of Hewlett Packard Company.

In 2014, the NFTC Foundation’s Global Innovation Forum awarded the first Trade Leadership for the Digital Trade Award in recognition of the leadership and contributions of political and business leaders for advancing frameworks beneficial to the conduct of global business in the Internet age and raising awareness of the ways technology democratizes access to the global marketplace for the benefit of the people and the planet.

NFTC Founded
The NFTC was founded at the first National Foreign Trade Convention held May 27-28, 1914 in Washington D.C

NFTC Foundation
In response to the changing economic circumstances, global trade patterns, and the dynamics and operations of the NFTC, the National Foreign Trade Council Foundation was created in June 1979. The Foundation would be a nonprofit educational institution to carry out the educational functions of the Council and plan and operate the convention.

NFTC Headquarters Moved to D.C.
In response to growing calls for a more forceful advocate for free trade issues in Washington D.C., the NFTC opened offices in the city in 1981 and eventually moved its headquarters there from New York City.

WTO Project Launched
To encourage the WTO to begin a new multilateral round of negotiations, the NFTC launched “The WTO Project” in March of 2001. Later that year, the WTO launched the Doha Round of WTO negotiations with the vocal support of the NFTC. For this round, the Council sent delegations to the WTO in Geneva to show business support for the trade talks.

Global Innovation Forum Launched.
As part of the focus on innovation and national competitiveness, in January 2009 the NFTC Foundation established the Global Innovation Forum, whose goal is to convene start-ups, small businesses, development professionals, academics and other stakeholders to discuss how public policy can solve critical global challenges and contribute to shared prosperity.